Blue Shark, one of our biggest and most exciting summer visitors are common off the Connemara coast. They can be expected from mid June through to the end of September; they are however sensitive to the water temperature, so their stay with us varies according to the weather we get during the year. As a rough guide to the most likely time, it would normally be from mid July to end of September.

The best tackle is a good quality rod and reel in the 30lbs class. The line should be either 30lbs Mono or Dacron and MUST be in good condition. The new superbraids are not suitable unless they are very heavy, ie 80lbs or more. The end tackle is also very important as the shark’s teeth are incredibly sharp. The trace (cf below) should be 12 feet (3.5 metres) long and made of braided stainless steel wire, NOT PVC COATED WIRE. It should have 3 swivels at regular intervals attached with crimp and offshore knot; a 10/0 bronze O’Shaugnessy or similar provides the business end. As the bait is suspended at about 40 feet from the surface, a balloon is used for a float. It is attached to the main line by means of a small plastic boom and power gum stop knot and this has the advantage of releasing the balloon when a fish strikes. Floats that are solid or are tied to the line are not good as they give a lot of drag when fighting a fish.An alternative method to traditional bait fishing is fly fishing for Blue Shark. Rudy Van Duijnhoven got the first European fly caught Blue in 1997 aboard Bluewater. It’s really exciting form of fishing as you must attract the fish right to the boat so as you can see your quarry. The specialist tackle required is on board, if you would like to try.

Your Chances and How Big Are They:

Their size varies quite a bit but they average around 55lbs or 25kgs. A small one will be in the region of 20 lbs and the Bluewater record stands at 150lbs. They can be plentiful and Bluewater’s best day was 34, but this was exceptional. On an average day we should catch from 4 to 6 fish and we may well have seen a couple of others.

All the fish caught aboard Bluewater are tagged and released and treated as humanely as possible. For examplpe, we use hooks that corrode quickly and John is an expert at unhooking the fish causing them as little damage as possible. The tagging programme is run by the Irish Central Fisheries Board and it is the largest marine sportfish tagging programme in Europe. The Blue Shark is truly nomadic and some of Bluewater’s catches have been recaptured as far away as the Grand Banks and the Cape Verde Islands. 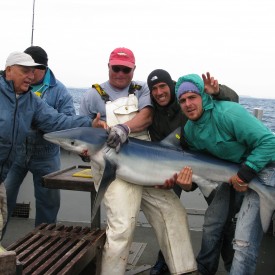 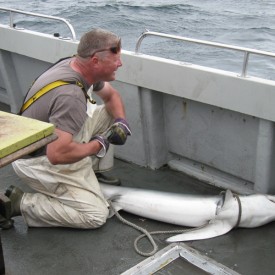