The lads from the Cuckoos nest came down for their annual visit and one day species competition on 21st. Middling weather allowed us out to drift over some interesting ground but a fresh breeze and strong tide made conditions difficult. The lads managed some nice fish, cod ling whiting and single nice Haddock despite the awkward drift before trying for an hour on the sand at anchor. This didn’t work either so we changed tactic and managed a few more ling anchored over rough ground. A number of anglers had 8 species for the day but it was won by Paddy Morgan with 8 species and the most points.

6 of the lads from the NUIG shellfish lab in Carna joined up with Brain Ramsey’s party of two for a days out on friday. They got lovely weather and a fair drift over good mixed ground. The pollock weren’t really at home, we did get some nice ones but not in the usual numbers but the other species made a good days fishing with 14 species on board for the day with good ling being the highlight and a good few Haddock and good sized whiting. Cod are starting to make an appearance and we got a good few up to about 5 lbs 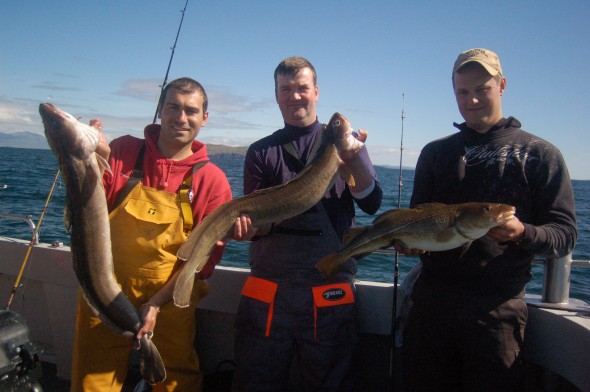 the lads from carna showing off some of their catch.